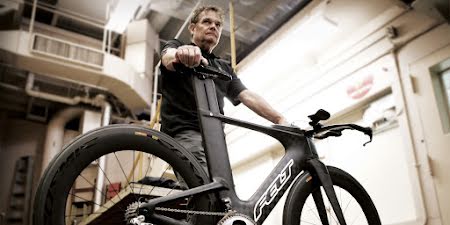 At Felt, our mission remains as it’s been since the beginning: to design, develop and deliver the best bicycles in the world. Period.
The roots of this mission trace back more than two decades. It all started in the late 1980s when motocross star Johnny O’Mara asked his ace motorcycle mechanic Jim Felt to build him a time trial bike. Johnny was competing in triathlons as training for motocross.
A competitive age-group triathlete himself, Jim had a distinct vision of how he could improve on the designs of the time. He focused on optimizing rider position to maximize aerodynamic efficiency. It worked. Johnny immediately started winning races, and before long Jim was building bikes for many of the world’s top triathletes. When Paula Newby-Fraser won the 1991 Kona Ironman on a Felt, Jim found himself officially in the bicycle business.
Ten years after Jim Felt built that first triathlon bike, it was time to expand. Enter Bill Duehring and Michael Mullmann. Bill, a bike industry veteran, brought years of product development experience and strong global supplier ties. Michael owned a successful distribution company in Europe. It was the perfect melding of skills. Felt now had more than 70 years of combined experience in developing, manufacturing and distributing high-quality bicycles. Jim brought his respected name, design experience and athlete relationships. Bill had broad-based product development knowledge and vendor connections. Michael had extensive experience in distribution and marketing.
“We didn’t want to be the biggest bike company in the world, just the best” was the trio’s shared maxim. Together Jim, Bill and Michael developed a singular goal: to build a bicycle brand dedicated to technological innovation and unmatched quality.
Since those fledgling days the Felt brand has grown far beyond its triathlon roots, and today includes a complete bike line that touches all of cycling’s various disciplines. Whether climbing the highest peaks of the Tour de France, bombing down single-track, racing your first triathlon, or commuting to work, Felt delivers a bike with uncompromised performance, maximum comfort and optimized efficiency.
In engineering, product development, sales, marketing and customer service, the same underlying values that sparked the start of the company continue to drive every Felt employee, every day. Indeed, every Felt bike is designed and built to make your cycling experience the absolute best it can be. No matter how you measure success, be it product development, milestones, or race wins, Felt has delivered. From innovative manufacturing processes such as InsideOut+ to breakthrough technologies such as Equilink suspension and the Bayonet Steering System, Felt is constantly expanding the boundaries of possibility and making them a reality.
The core to this success is a company-wide mandate to continually improve on past success. Nothing is done in a vacuum. Instead, each new Felt bike, be it road or off-road, high-end performance to entry-level recreation, utilizes critical lessons from past designs and then incorporates new enhancements. The results speak for themselves. The world’s fastest UCI legal time trial bike, the DA, continues to dominate the international time trial and triathlon circuit. The Edict full-suspension mountain bike is a stalwart on the world’s elite cross-country scene. The top-tier F road bikes are mainstays of the European peloton. And, the TK1 has been raced on the track at two Olympic Games, Beijing in 2008 and London in 2012.